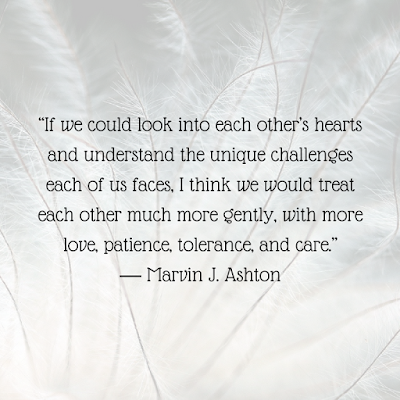 I know what it is like to deal with “difficult” people.  As an administrator in several online Gastroparesis and chronic illness groups, I have addressed the arguments, accusations, and hurt feelings caused by their inappropriate and downright harmful behavior on several occasions.  I see the havoc these souls wreak on a daily basis.  Further, in general, I recognize that, for whatever reasons, there are those among us who seem to see only the negatives, who behave selfishly and self-importantly, who viciously attack others for seemingly no reason, who pout, spew all sorts of venom, and never seem to be able to get along with any of the people around them – even the ones genuinely trying to help.  But while I am frequently tempted to renounce these people, deep down, it pains me to do so, and I long for a better way, a more perfect path.

I cannot help but think that the trying people who sometimes surround us must be seen in a different light.  I recognize that poor behavior is never acceptable and that it is reasonable to expect others to be kind regardless of their history, current circumstances, and feelings, but at the same time, I also understand that no one can ever really know the factors and events that have shaped others and have made them the beings they are.  No one can know the intimate and secret details of another’s heart; no one can feel the deep hurt, the anguish that overwhelms them; and no one can truly experience their lives in a wholly personal manner. In short: you do not know another man’s story until you have lived it.

So, rather than outright reject negative (and sometimes hateful) people, I strive to take an alternative approach.  I am not always successful, nor do I consistently live up to the ideals I espouse, but I endeavor to live better, always.  I make my fair share of errors in judgment, and I sometimes take actions I later regret. I lose patience and am short with people on occasion. I let doubts creep in from time to time – and I always, always feel inadequate.  But I remind myself that people, including me, make mistakes.  We all have shortcomings, but we are all human beings, worthy of dignity, gentleness, and compassion simply by the nature of our existence.

Now, let me be clear: I do not tolerate mistreatment, nor do I allow myself to be used, demeaned, or abused.  I am not a doormat; yet, I do not see my fellow human beings, even the difficult cases, as disposable and do not easily write them off.  After all, who else will care for them?  Indeed, I am my brother’s keeper.  And I have found that people are not purely “good” or “evil.”  They are, rather, a complicated and messy mixture of both, individuals worth knowing despite their flaws and frailties.  And while I seek to respond gently, uplift, and never harm, I am not a gushing stream of optimism, and I rarely direct “positive thinking” quotes and memes at those struggling.  I find these shallow and less than heartfelt, and I do not believe they strike at the heart of the matter or touch the souls of those in distress.  I do not see the value in trite sayings that leave people cold and unaided.

Instead, I seek a more genuine approach, and I deal with people honestly, though as tenderly as possible.  I try to recognize that people sometimes lash out when they are in pain – physical or emotional.  There are those who never seem to have a tender word to say nor a helping hand to extend.  They intentionally and unintentionally offend those around them or take offense at words that were not meant to insult.  They distance themselves from others emotionally and have not the slightest clue how to return a kindness that has been offered them.  They fail to consider the feelings of others and shy away from giving and receiving sympathy.

I further remind myself that people often fear the world and the people around them.  They have been wounded by the harsh actions and hostile words of others.  They are afraid to reach out, open their hearts and hands to those who truly seek only to aid them because they have not often experienced the grace and understanding that is being offered to them.  They do not value themselves or sense their worth because they have been treated as valueless and unworthy.  They have been mocked, berated, abused, and rejected time and time again – frequently by the very people who were tasked with caring for them.  Life – people – can be cruel and unfair.

I likewise tell myself that because no one has had identical experiences to my own, not everyone thinks or believes the way I do. Good people can and do disagree.  Beyond that, at times, people have weak moments or moments of anger, and they act impulsively. They behave irresponsibly, overreact, and wound others. This is regrettable, but is it really unforgivable? Must we jump on every small transgression?  Must we take offense at every spoken word?  The mistakes made by these “flawed” beings do not render them any less worthy of consideration, understanding, or support, nor do they justify harboring feelings of betrayal and anger or, worse yet, seeking retribution.

We are imperfect human beings, but for the most part, we are all striving to get through the day the best way we know how.  I make every effort to focus on the good in people and spare them my judgment and the lashing of my tongue.  For, it seems to me, what the “difficult” people (such as I, on occasion) need least of all is to be surrounded by those who would repeatedly remind them of their failures and shortcomings, to again face accusations and cruel remarks that point only to their inadequacies and their weaknesses.  What they need far less than anything else is to face taunts, accusations, cruel rejoinders, exacting tones, screaming tirades, and vengeful responses.

Pardoning others for their transgressions and accepting them with all their weaknesses and flaws – that is what I find to be of value and how I endeavor to behave.  I long for a community that is a welcoming place for all to come and share their concerns, joys, heartaches, weaknesses, and doubts without fear of judgment, scolding, reprisal, or rejection – a community that is a safe haven where people feel comfortable sharing their innermost concerns without the fear of negative repercussions and spiteful responses. I yearn for an environment where we openly and honestly discuss anything in our lives that disturbs us, concerns us, fascinates us, uplifts us, or keeps us from healing, one on which we are respectful of one another, even when we disagree. Minor disputes do not have to become wars and excuses for our own wicked conduct.

I believe, albeit with great effort, we can create this sense of community.  Not everyone will respond to our overtures, of course, but it is perhaps our best hope at bringing people back into the fold.  Our world can never be perfect, but it can always be improved.  We can learn to exercise compassion and strengthen the bonds between us. We can learn to treat those “difficult” souls ever so gently and demonstrate for them a better way.  Rather than division, we can choose unity, forgiveness, acceptance, and grace, and recognize what we all have in common: hardships, deficiencies, failings, shortcomings, life in a fallen world – the human state.
Posted by Melissa Adams VanHouten at 6:28 AM