Taken by the Wind

I had a dream last night.  I was sauntering through sunny fields, cradling a box filled with all the jewelry I have collected and held so dear over the years – priceless pieces, though only in my estimation, I am sure.  It was a glorious day, peaceful and calm, and I was content to stroll leisurely, without a care in the world.  I was happy, oblivious to the storm which was brewing.

Then, in an instant, the sky darkened, and the wind howled, the force of it propelling me forward, causing me to stumble.  The tempest came from nowhere, disrupting my peace, catching me off guard, and frightening me with its intensity.  I was thrown off balance and my box of precious treasures emptied itself into the swirling gale.  I cried out, clutched tighter to my prized possessions, longing to hold on, but to no avail.  The contents were caught up in the whirlwind, snatched from my grasp, my attempts futile.

When the winds died down, I surveyed the aftermath and ran frantically through the fields in search of my belongings.  They were scattered about, some in large inaccessible pools of water, some embedded into the ground so deeply they refused to release, and many nowhere to be seen at all, seemingly gone forever.  I collapsed to the ground and wept over my loss, but after a time, I pulled myself up and went to gather any articles which might be left.

One by one, they appeared to me:

… a necklace with a raven, black as midnight, proud and strong – a representation of logic, cleverness, sharp-thinking, and intelligence – a meaningful favorite of mine.  It was dusty, covered in film, and, though I tried my best to wipe it clean, the coating remained. I confirmed the damage and dropped it in my box.

… a tiny pin, a small bunny, given to me as a child by a friend, holding little monetary value but a wealth of sentiment, a reminder of my untroubled youthful days.  It was mangled, bent, beyond repair.  I grieved the loss but returned it to my box.

… my high school class ring, which I once esteemed and swore to never remove, lay in the mud, scratched, and emptied of its stone.  I ran my fingers over the hole, accepted the regret, and placed it in my box.

… my wedding ring, a cherished symbol of my eternal commitment to another who loves me as deeply as I love him.  It was dented, misshapen, a perfect circle no more.  I clenched it tightly in my hands, caressed it, uttered silent appreciation its ends were still joined, and gently placed it in my box.

… a beaded bracelet, dangling a spoon, handmade by my daughter, whom I value above all, as a tribute of her adoration and a recognition of my frailties.  It was tarnished and worn, but as I gazed upon its new patina, it somehow seemed more charming than ever before.  I kissed it lightly, full of gratitude, and added it to my box.

The damage was done – my collection incomplete, imperfect.  I wept bitterly over my forfeiture and mourned that which would never again be whole. But I acknowledged the remnants as well, thankful I had not lost all, and as I slowly lifted the box and sifted through my remaining trinkets, I noticed a small chest at the bottom, one I had until now overlooked.  It had not been tossed to the wind with the others but had stayed safely tucked away through the storm.  As I marveled at the thought, I opened its lid, and revealed its contents: encased in glass – a present bestowed upon me by my youngest brother when he was a small child, relegated to the bottom, covered by the grander jewels for so many years – a tiny mustard seed… my hope, my faith, my future.  As the message sank in, tears of gratitude flowed. 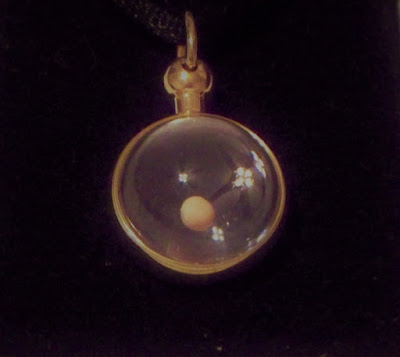