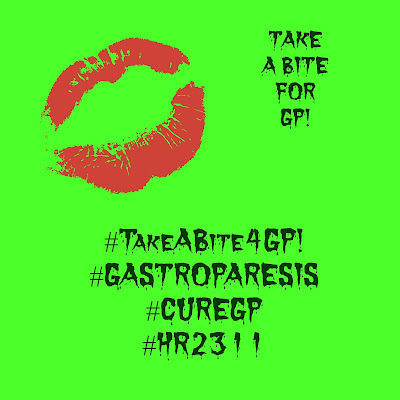 Thank you for your interest in our new awareness campaign: ‪#‎TakeABite4GP! We were inspired by a movement that the Cystic Fibrosis Foundation recently undertook and adapted it to fit the needs of our community (https://www.cff.org/Take-Action/Raise-CF-Awareness/Raising-Awareness-With-TakeaBreathforCF/). We are hoping many of you will wish to get involved by creating your own brief clip and by recruiting friends, family members, medical professionals, the media, and anyone else willing to join in this effort. Challenge them to create a video or snap a picture that will help us spread this campaign and increase awareness for GP!

We would love to see supporters of our Gastroparesis community "Take a bite for GP!" Can't eat even a bite? No problem – hold an empty spoon. Don't like video? Hold a sign and take a picture! The idea is to get people to notice that we cannot eat with the ease that "normal" people can. Be creative. We know you can!

If you would like to include a request for donations to one of our digestive disorders organizations, we have set up two funding sites/links for your convenience:

The intention is to start spreading the word and creating these brief video clips and/or photos for release. Post them on your personal pages and all over social media sites. Challenge your loved ones to do the same. We hope to have the campaign off and running during July and in full swing during August, our Gastroparesis Awareness Month. We want to see these clips all over social media!

Hope you will join us and spread awareness for GP!

** For additional information, discussion, and ideas regarding this campaign, please join our public group at https://www.facebook.com/groups/TakeABite4GP/.  For more information about GASTROPARESIS, please see the brief summary below. **

Gastroparesis literally means “paralysis of the stomach.”  It is a digestive motility disorder in which the stomach muscles, controlled by the Vagus nerve, fail to contract and move food from the stomach into the intestines at the proper rate.  Under normal conditions, the stomach stores food only long enough for it to be ground down into small pieces by contracting stomach muscles in preparation for further digestion in the intestines.  This process is slowed in those afflicted with Gastroparesis, resulting in food being “stored” in the stomach for an abnormally long period of time.

This slowing of the stomach emptying process can cause debilitating and sometimes life-threatening symptoms, including stomach/abdominal pain, bloating, nausea, vomiting, heartburn/GERD, and early satiety and can lead to serious complications such as malnourishment, dehydration, extreme weight loss, esophageal damage, blood sugar fluctuations, bezoars, and overwhelming fatigue.

The National Institutes of Health (NIH) estimates that more than 5 million people live with Gastroparesis.  The most common known cause of this condition is Diabetes, which accounts for about one-third of the cases.  Other known causes of Gastroparesis include neurologic disorders such as Multiple Sclerosis and Parkinson’s Disease, connective tissue disorders, complications resulting from surgeries, various medications (such as some narcotics and antidepressants), and direct damage to the Vagus nerve.  Most cases of Gastroparesis, however, are labeled “idiopathic,” meaning that there is no known cause.  (Some researchers and physicians theorize that in such cases the cause may be a viral infection, but this has not been scientifically proven.)

Gastroparesis is most commonly diagnosed by the Gastric Emptying Study (GES), a procedure in which radioactive material (food) is traced by a scanner as it moves through one’s digestive tract.  This test allows one’s doctor to track the rate at which food travels from the stomach to the small intestine.  Other methods of diagnosis include upper endoscopy, barium x-rays, gastric manometry, and (less commonly) the smart pill (which, when swallowed, transmits data regarding the rate of passage through the digestive tract).

As of now, there is no safe, reliable, and effective treatment for Gastroparesis – and there is no cure.   Available treatment options include often ineffective surgeries, such as Gastric Electrical Stimulation (pacemakers) and pyloroplasty; medications which carry the risk of serious side effects, such as Reglan (which comes with a “Black Box” warning from the FDA) and Domperidone (which has not been FDA approved); feeding tubes or total parenteral nutrition (TPN); and dietary changes (liquids or soft foods), which often do not provide relief.

Living with Gastroparesis is challenging, both physically and mentally.  It is truly a life-altering diagnosis.  We seek awareness, better treatments, and, ultimately, a cure. 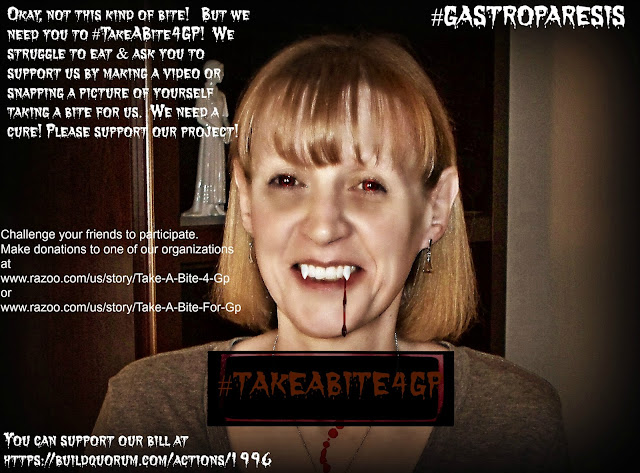 Posted by Melissa Adams VanHouten at 7:53 AM